THE Anglo-Irish Treaty was signed 100 years ago this month.

It was this document, signed after nearly two months of negotiations between representatives of the British and Irish governments in London, that laid the foundation for the creation of the Irish Free State, which would later be called the Republic of ‘Ireland.

A poignant exhibition highlighting the importance of this document and the negotiations that led to it, was launched this year on the occasion of this anniversary.

This exhibition, a collaboration between the National Archives of Ireland and the Irish Embassy in London, titled Treaty 1921 – Documents from the Archives, was first launched in London at the British Academy.

Irish Culture Minister Catherine Martin was in the capital to open the exhibition on October 11, marking the exact centenary of the start of treaty negotiations, which began at 10 Downing Street on October 11, 1921.

This month, that exhibit moved to the Coach House Gallery in Dublin, where it opened on December 6, exactly 100 years after the landmark deal was signed.

The exhibition, which will remain open to the public in Dublin until March 2022, centers on the current Anglo-Irish Treaty – which is one of the most important historical documents held by the National Archives of Ireland.

Using this as a centerpiece, the National Archives also released a series of other significant documents of the time for public reading – including footage and images of the negotiations in London in 1921 as well as historical documents, official notes and private documents.

All of them were made public for the first time, which National Archives of Ireland director Orlaith McBride said was important if they were to tell the story that needed to be told in this important anniversary year.

“From our perspective, we knew the story we wanted to tell in this exhibit,” Ms McBride told The Irish Post.

“We didn’t want to tell the post-Treaty story, we just wanted to talk about the journey between the truce [in the War of Independence] being signed on July 11, 2021 and the treaty being signed at 2 a.m. on December 6, 2021.

“So it’s really on this period that we focused, from our point of view, because we are not historians and we are not politicians, we are the National Archives.

“We preserve the state archives and for the first time in 100 years we bring the archives relating to the founding of the state and this most important period, in terms of establishing what was to be the Free State and would eventually evolve into the Republic of Ireland, we made these records public and exhibited them for the first time. 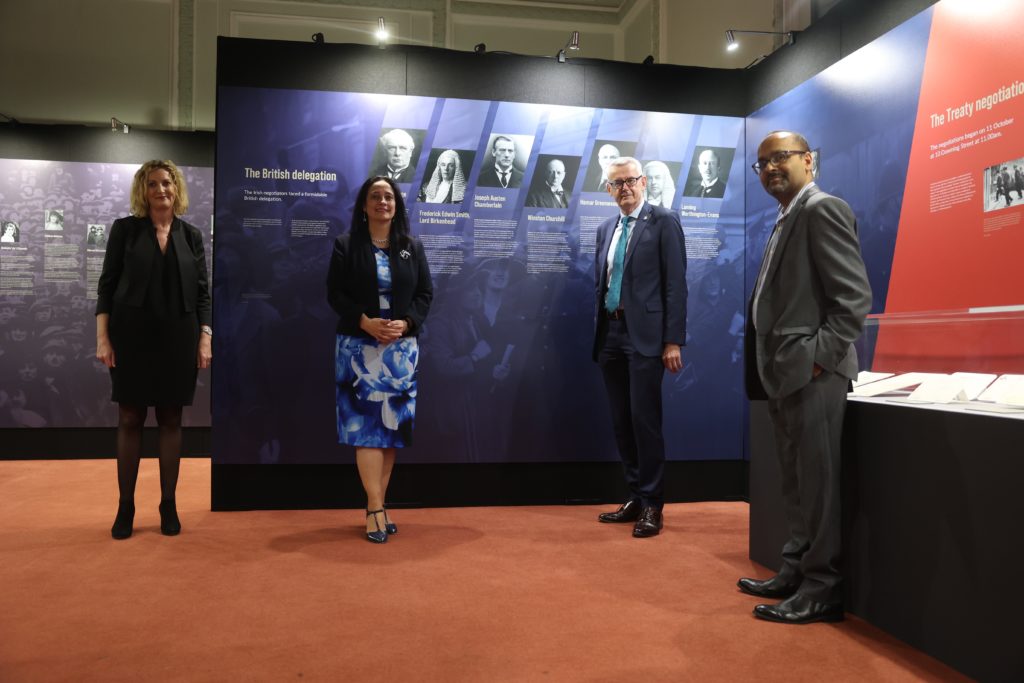 Treaty exhibition, inaugurated in London, is now in Dublin

It was not an easy exhibition to organize, Ms McBride admits, especially since the first stop was in London and had to be planned at a time when travel was restricted between Britain and Ireland due to Covid-19.

“Ordinarily you would use a formula that you are quite used to putting on an exhibition like this,” says Ms McBride, “but for the London exhibition, the Covid backdrop obviously made it much more difficult. . “

“Then we had a call on Zoom so we could get a feel for the space,” she added.

However, the planning worked, despite the pandemic, and the impressive British Academy exhibit was a hit for the two weeks it was in place.

“The reason we chose London for the exhibition is that on October 11, 1921, 24 Irish men and women came to London to work, in one form or another, on the negotiations for a peace treaty between the ‘Ireland and the UK at the time,’ admits McBride.

“So we had everyone, including the five plenipotentiaries, who are the negotiators, we also then had the secretariat, made up of officials and secretaries, who were the force behind it in many ways, the women who were there. typing notes and documents at 2 a.m., all over there in London.

“They took two houses while in London, at Hans Place and Cadogan Gardens in Knightsbridge, these were their administrative bases but also their houses for the two months.

“So you also had those running the houses here – they had security, servants, cooks, etc.

“It was an extremely important job that they all had to do,” adds McBride.

“But the magnitude of the moment must have been important enough for them and what we wanted to do was bring the audience some recordings that would show what those two months were like.

“So in the exhibition we have official documents, government documents, memos, we have draft treaties, we have the treaty itself, but we also have documents relating to the daily life of the Irish delegation that was in London – the food they bought, their expenses, car rentals etc.

“We really wanted to give a feel for the color, the flavor and the full experience of all the men and women who came to London 100 years ago.” 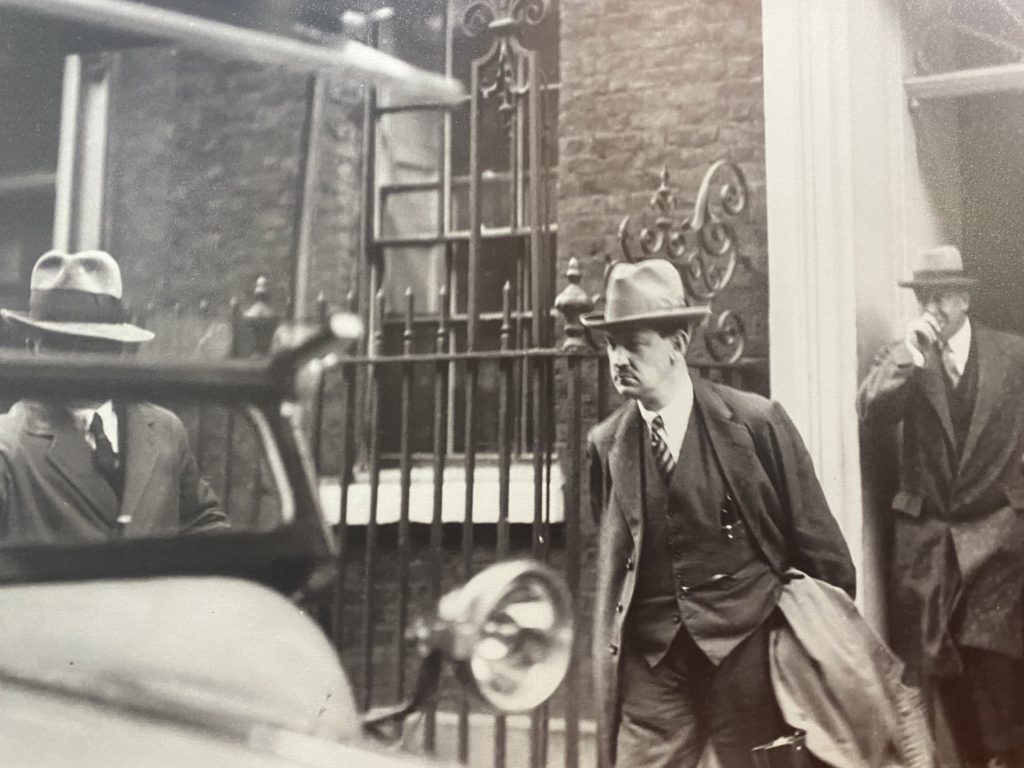 As a result, the exhibition provides both political and social context to the treaty negotiations and to the Irish men and women who supported it in London.

“We wanted people to understand the context and not see the treaty in the abstract,” says McBride.

“We want them to not only see it as a peace treaty between two nations, but to understand that in fact, in 1921, you had not made the round trip between the cities, the eyes red in the morning and return the following evening. The Irish delegation had to come and live here.

“They would take the postal boat back and forth from Ireland to London every two weeks because they were also part of the government in Ireland, so they had roles to play there as well.

“It was very important for us to give people all the experience of what the negotiation of the treaty entailed, it was not just the meetings in Downing Street or the house of Winston Churchill, it was also what s ‘happened when they were back at Hans Place or Cadogan Gardens.

Despite the serious task ahead for the Irish delegation in London, the exhibit reveals that there was still time to socialize and that the London-based Irish community was also keen to offer their support to their visiting countrymen and compatriots.

“They had a great time when they were here too,” Ms. McBride admits.

“In many reports from the period that have been read, there were feasts, there were dinners.

“There were people like George Bernard Shaw, the Laverys, people well established in London society who also opened their doors to negotiators and it was important to position them.

“There was a lot of support from the Irish Diaspora and the London Irish more generally as well,” adds Ms McBride.

“Hundreds of Irish came to Downing Street on the morning of October 11, 2021, at the start of the negotiations, and came every morning thereafter to support the plenipotentiaries in the negotiations.

“We also hosted this huge Irish community event at the Royal Albert Hall at the end of October.

“The Irish Self-Determination League led this, organized with Art O’Brien, Sinn Féin’s liaison officer in London at the time.

“They knew how important it was to bring the Irish community together, introduce them to the negotiators and in a way restore that sense of Irish and sense of collective effort into what they were doing on behalf of Irish people back home, but also Irish people in Great Britain. 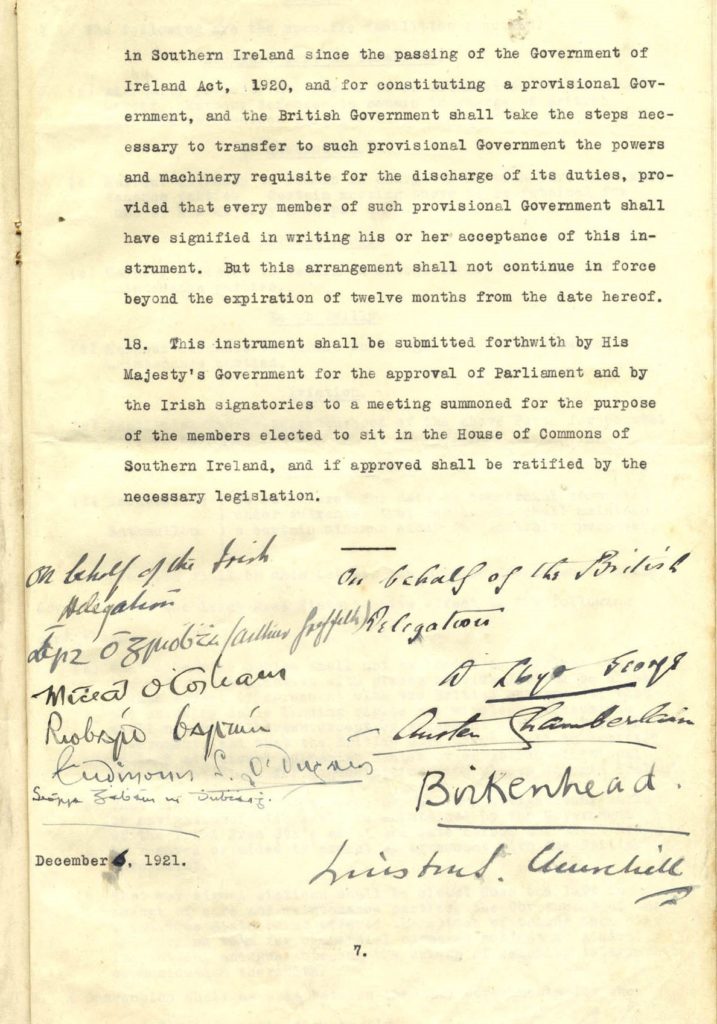 Ms McBride believes that the support of the Irish community in Britain would have played an important role in the work of the Irish delegation during the treaty negotiations.

“The Irish community in London supported them, certainly,” she says.

“I think in those times which would have been very stressful for the negotiators, knowing that they had the support of the Irish community here in London and that there were people waving flags and cheering them on every morning when they came to Downing Street would have strengthened their resolve, strengthened them at different stages of the process when the going got tough.

“There is no doubt that there have been times like this for them.”

Ironically, now, as Ireland reflects on the 100 years since these important discussions, there remain urgent modern discussions regarding the future of Britain, Ireland and Northern Ireland in the post world. -Brexit we are in.

The parallel has not been lost for Ms. McBride.

“There are similarities to some of the problems we face today and parallels,” admits McBride, “but from our perspective we’re just presenting the cases as they are, we are not offering any analysis, we’re not offering any interpretation, we’re just presenting the files and maybe letting people see them in the context of the negotiations or discussions going on in 2021. “

She added, “But what I would say, as the exhibit shows, walking into a room and having conversations, and continuing to have conversations can lead to a split position in the end.”

The 1921 treaty: documents from the archives are on display at the Coach House Gallery, Dublin Château until March 27, 2022